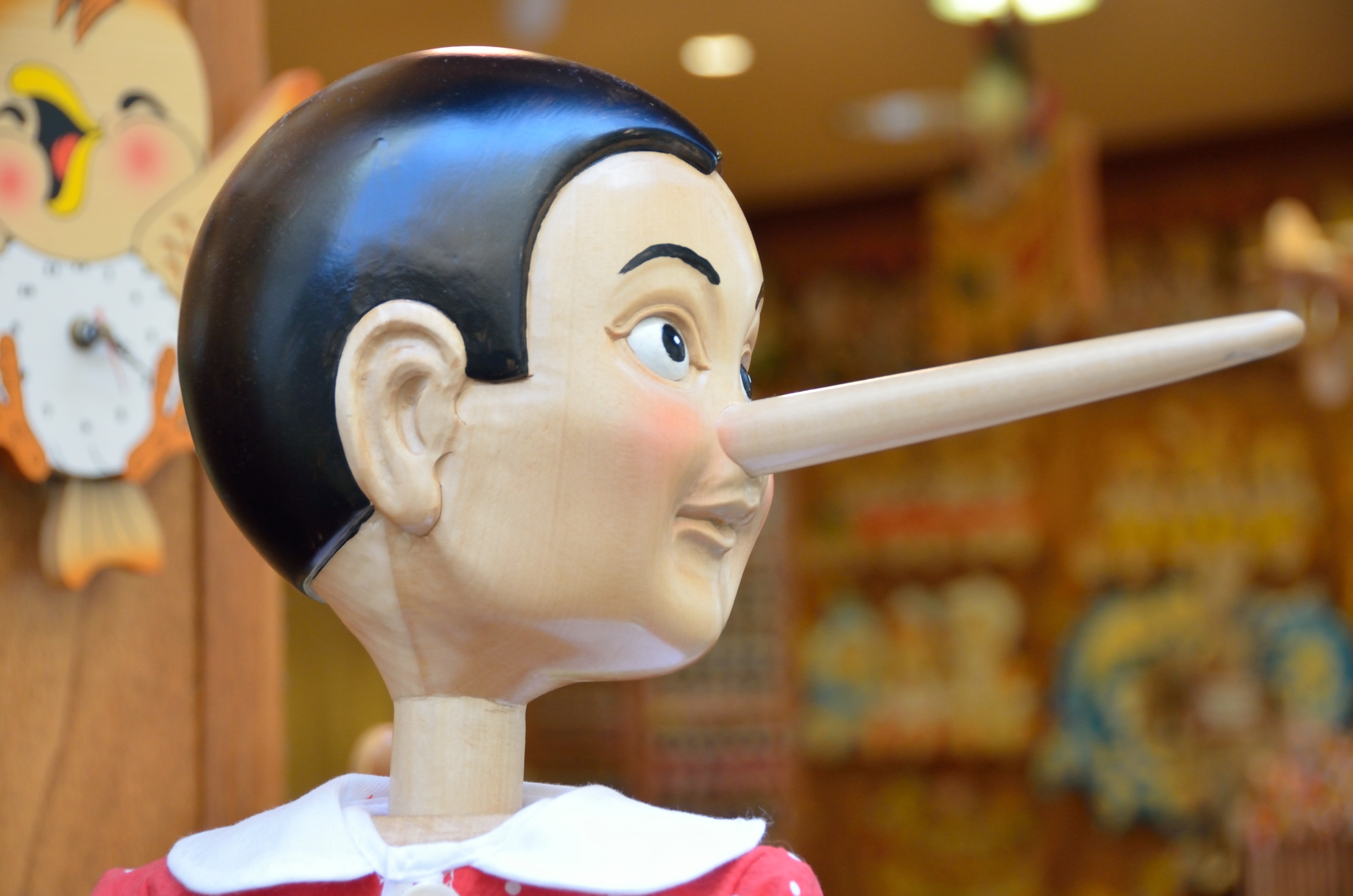 If rhetoric is the art of persuasion, one might see lying as one of the most sophisticated – though not noble – rhetorical activities. Lying is, after all, persuading someone to believe in something that the speaker knows not to be true. How do we do that?

Recent research, however, suggests that clues are hidden within the rhetorical act of deception itself: “Lying words” that people use more often when they are trying to fool others.

Linguists like Jeff Hancock, communications professor at Stanford, have made some headway in understanding the techniques we use when lying.

In his study of online dating profiles , Hancock studied the linguistic strategies of 80 Americans looking for dates on services like match.com. He assessed the overall truthfulness of the ad by checking how accurate descriptions of height, weight and other physical attributes were. He found that in addition to writing shorter self-descriptions, deceptive daters used less self-references (for instance pronouns such as I and me) and more negations (such as I am not). This rhetorical strategy, he suggests, serves to distance the writer from the deceptive content of their ad. His algorithm for automatic deception detection, based on these features, was able to correctly classify 63 percent of the ads as “deceptive” or “truthful”. (In a similar study , he showed that in online dating, men tend to lie about their height, women about their weight).

This behavior seems quite straightforward; but is it something that the liar’s audience can actually pick up on? The answer, according to another study by Hancock, is a decisive “yes and no”. In this study, he had seventy students chat to each other online, instructing them to lie about some and be truthful about other items on a list of topics. (Student were encouraged to try hard by being told that the ability to lie persuasively was “a good predictor of their future success in social settings [and] various jobs like consulting and counseling”). Again, people changed their rhetorical style when lying. Again, they used less self-oriented pronouns. In contrast to the dating study, however, they were more wordy when lying than when truthful and also used more sense-based words such as see.

The really captivating finding, however, was the reaction of the liar’s audience: communication partners seemed to notice when they were being lied to, asking more questions and producing fewer words when their conversational partner was being deceptive. This seemed to be a completely unconscious reaction, however: When asked after the study, they were unable to point when their partner had been lying.

This suggests that our usual rhetorical strategy when lying is to act as normal as possible. This seems a sensible and straightforward approach; however, as the research above shows, we may fail to do so: we talk too much, or we change the way we talk. Part of the reasons seems to be that we feel the need to preserve some self-respect (or good character) by distancing ourselves linguistically from our own lies.

And while conversational partners generally seem to be unable to pinpoint other people’s lies, they seem to have a feel for it; and computer algorithms can see it in the statistics and word counts.