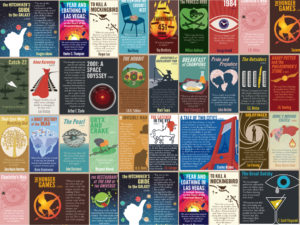 The Hitchhikers Guide to the Galaxy by Douglas Adams. First line: “Far Out in the uncharted backwaters of the unfashionable end of the Western Spiral arm of the galaxy lies a small unregarded yellow sun.” Fear and Loathing in Las Vegas by Hunter S. Thompson. First line: “We were somewhere around Barstow on the edge of the desert when the drugs began to take hold.” To Kill a Mockingbird by Harper Lee. First line: “When he was 13, my brother Jem got his arm badly broken at the elbow. When it healed, and Jem’s fears of never being able to play football were assuaged, he was seldom self-conscious about his injury.” One Flew Over the Cuckoo’s Nest by Ken Kesey. First line: “They’re out there. Black boys in white suits up before me to commit sex acts in the hall and get it mopped up in the hall before I can catch them.” Fahrenheit 451 by Ray Bradbury. First line: “It was a pleasure to burn.” The Princess Bride by William Goldman. First line: “This is my favorite book in all the world, though I have never read it.” 1864 by George Orwell. First line: “It was a bright cold night in April and all the clocks were striking thirteen.” Charlotte’s Web by E.B. White. First line: “Where’s Papa going with that ax?” said Fern to her mother as they were setting the table for breakfast.” The Hunger Games by Suzanne Collins. First line: “When I wake up, the other side of the bed is cold. My finger’s stretch out, seeking Prim’s warmth but finding only the rough canvas cover. She must have had bad dreams and climbed in with mother. Of course she did. This is the day of reaping.”