Recently a new augmented reality app called Capsule came to my attention. It is intended to be an augmented reality social network based on location. Having an unique moment while walking somewhere in the city? Take a photo or video, put it into a capsule and drop at the location where it happened. Other users of the app will be able to see the moment you recorded as they walk by the same location, hours or years later.

Yes, it is that accurate (Our table at the office covered in capsules.) #AR #AugmentedReality #Startup 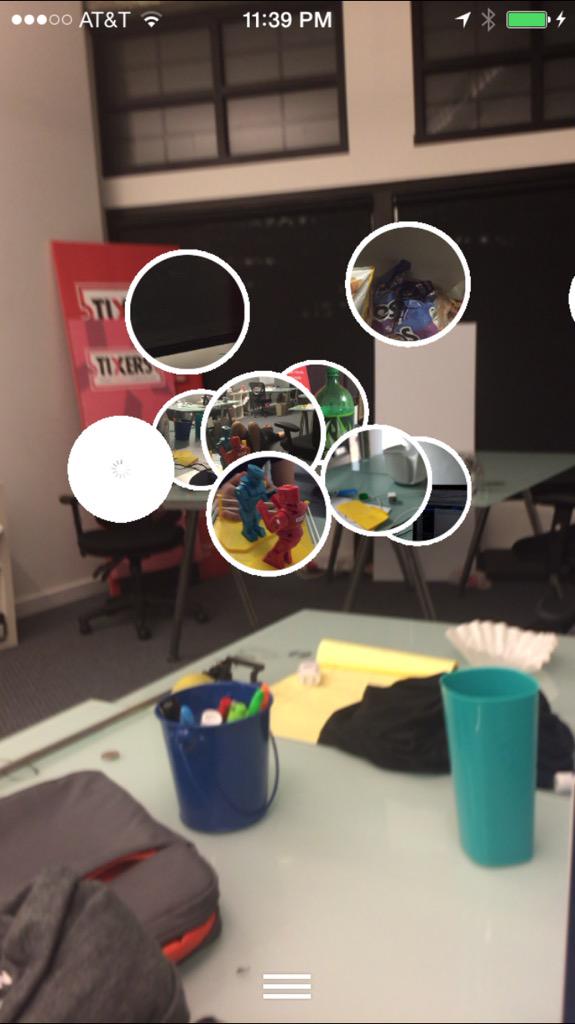 “As if the walls could talk” is their slogan – a very interesting concept. This got me thinking about our own project of creating augmented reality environments for pedagogical purposes, and the idea of being able to crowd source a layer of augmented reality (in the LayAR platform we are using for this project, layer means a set of augmented reality points of interest). Before I go any further with this, I must do my obligation as a historian and say that the term crowd sourcing is a neologism for something that has been happening for centuries, according to a new project from the Stanford Spatial History Project – yeah, I know, it’s just something we have to do.

But the idea of having several people contribute information to a layer of augmented reality has great pedagogical implications, among others. I was recently talking to a history professor interested in teaching a public history seminar where the students create narratives about Austin’s local history, doing research in the city archives. Now imagine if instead of merely writing up their stories about the city, they could instead compile that information into an augmented reality tour of the city, where users can access this information as they walk by the actual locations where events took place?

While creating an augmented reality tour sounds very complex, our project here at the DWRL is trying to make that accessible to people with minimal technical skills, or hopefully with none at all. We are using the LayAR platform, which provides all the functionality necessary for creating an augmented reality environment. But generating the content requires several technical tasks, especially creating a PHP script that respond’s to the app’s requests for information, and a database with all the information regarding the points of interest, from which the PHP script queries its data.

Yet we want to make it easier for professors to use this application, without having to create PHP scripts or modelling databases. An out of the box solution for generating this type of content with no technical skills would be a good way to democratize the pedagogical use of augmented reality. So I am introducing the prototype of our “Raugmenter” – an easy to use application which allows users to create their points of interest by entering data in a form and selecting GPS coordinates from a Google maps widget. We hope that this will make it easy for professors to create assignments where students can collaboratively create their own augmented reality tours, much like we are doing here at the DWRL.

The application will use oAuth google login, so that anyone who creates a project can invite other people to collaborate on it. I hope that people will find new uses for it, beyond the pedagogical one I just mentioned. Once we set up a structure for user authentication, anyone with an account will be able to easily create their own augmented reality tours, or crowd source their creation by inviting people to contribute. If you are interested in trying out this beta once it’s live, just contact us at the DWRL for an user account.

In any case, stay tuned for more updates on our project.